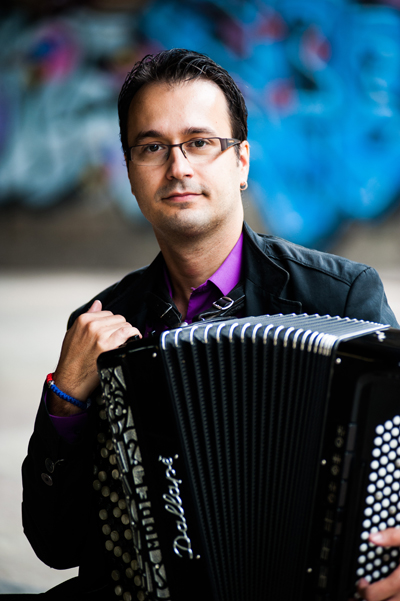 Zivorad Nikolic is a Serbian accordion player. At the age of seven he joined the Miloje Milojevic School of Music where he studied with Vesna Djurdjevic, Radomir Tomic, Radenka Ristic and Snezana Vlastic. In 2002 he was accepted by the National Conservatory of Music in Marseille, France and in his first year was invited to play at the Napoleon Palace. Zivorad went on to study with Owen Murray at the Royal Academy of Music in London, graduating in 2009. During this time he received the Sir John Barbirolli Foundation Award.

Since 2007 Zivorad has been a member of Paprika, a six-piece band performing traditional music from Eastern Europe. He is also a member of the Fugata Quintet, Accordduo and She’koyokh ,the award winning Klezmer ensemble. He has performed solo as well as in chamber groups in some of the most prestigious venues including St. Martin in the Fields, St. John’s Smith Square, Royal Festival Hall, Kings Place, Royal Albert Hall, Buckingham Palace, New Morning (Paris), The Forum (Melbourne), Enmore Theatre and Brisbane Powerhouse and at festivals including Glastonbury, WOMAD, Cheltenham, Norfolk& Norwich, Deal, Canterbury, Cambridge, Auckland and Edinburgh Fringe. In 2006 he was privileged to perform at Gyorgy Kurtag’s 80th Birthday concert in Budapest.

Zivorad has recorded on the albums of several artists including David Gomez, Aiden Love& Forty Thieves Orchestra and Marti Pellow. In 2011 he performed in the premiere of Prophet and Loss, a community opera written by Julian Grant. He has also featured on Channel 4’s How Music Works and in a live performance for the BBC Radio 2 programme, Friday Night Is Music Night. Recent highlights include live performance of Kurt Weill’s ‘Threepenny Opera’ conducted by Ilyich Rivas as well as ‘Tobias and Angel ‘a Church Opera by Jonathan Dove. Zivorad also played in some theatre productions in UK such as ‘Fiddler on the Roof ‘at the Crucible theatre in Sheffield as well as ‘Piaf’ at the Curve theatre, Leicester. He has also recorded soundtracks for films and some of the most recent collaborations are with Anne Nikitin and Michael Chanyi- Wills.